“I feel my biggest achievements at LSE have been to inspire younger generations of scholars from various parts of the world. This includes a redoubtable array of PhD students many of whom are now eminent in their own right whether in the context of the academy, international organisations, think-tanks and NGOs, and who are strengthening and diversifying scholarly research on gender in ways that are applicable to ‘real world problems’.”

LSE faculty and students mourn the passing of Sylvia Chant, Professor of Development Geography, who died peacefully on 18 December 2019. Sylvia will be greatly missed by all who knew her.

LSE faculty and students mourn the passing of Sylvia Chant, Professor of Development Geography, who died peacefully on 18 December 2019. Sylvia will be greatly missed by all who knew her.

If you would like to leave a tribute to Sylvia, you are invited to do so here.

Sylvia Chant, Professor of Development Geography, who has died at the age of 60, was a world-leading feminist geographer who fundamentally shaped the field of gender and international development. She was a pioneering and passionate advocate of the need to recognise women’s roles in international development which she argued in various ways in her 18 authored or edited books and over 150 papers. Beginning with Women in the Third World (1989) (with Lynne Brydon), this book was the first of its kind arguing for the importance of analysing women’s roles in rural and urban areas of the developing world. Sylvia went on to develop ground-breaking conceptual, empirical and policy-engaged work on the gendered nature of poverty, inequalities and urbanisation, all based on meticulous fieldwork and a deep feminist commitment to the transformative power of research. She was also a dedicated teacher whose kindness, generosity and vision have left a deep and lasting legacy within and beyond the academy, and far and wide globally.

In her lifelong quest to challenge gender blindness in researching and teaching international development, Sylvia brought her characteristic fervour to revealing and understanding the lives of women living in poor urban communities, and especially those heading their own households. She did this through profoundly engaged fieldwork in Mexico, Costa Rica, the Philippines, and The Gambia as well as through sustained theoretical innovation. As the world’s leading expert on female-headed households and poverty, Sylvia dedicated many years of her career to arguing against simplistic understandings of the feminisation of poverty and the misleading ways in which this was causally linked with female household headship in mainstream policy formation and much academic literature. She developed these arguments in her books, Women-headed Households(1997) and Gender, Generation and Poverty (2007) as well as in numerous papers as recently as 2019 in Feminist Economics. She not only theorised an alternative to the feminisation of poverty through the much more nuanced ‘feminisation of responsibility and/or obligation’ to show how women are increasingly burdened with dealing with poverty, but she consistently called out those who insisted on using erroneous and homogenising data and research to portray the lives of women in the global South. Reflecting her profound personal and academic generosity, Sylvia was always keen to collaborate and co-author with others and to share her ideas. This is perhaps best reflected in the hugely impressive edited collection International Handbook of Gender and Poverty (2010) comprising over 100 chapters from 125 established and early career authors.

Sylvia was born in Dundee to June and Stuart, a microbiologist, on 24 December 1958. She grew up in London and attended Lady Margaret School in Parson’s Green and subsequently, Kingston College for sixth form before studying for a BA in Geography at King’s College, Cambridge. It was at Cambridge that she developed her feminist sensibility and disquiet at the lack of female role models in the academy as well as an awareness of the male bias inherent in existing work on the geographies of international development. After Cambridge, being well-versed in feminist writing gleaned from her membership of an inter-collegiate women’s group at Trinity Hall, and determined to challenge the gendered status quo, Sylvia began her fully-funded PhD at University College London in 1981 under the supervision of Professor Peter Ward (and Professor Alan Gilbert) studying the role of women in the construction and consolidation of self-help housing in Querétaro, Mexico. Indeed, this ground-breaking study was one of the first ever to recognise women as key actors in self-build housing in poor urban communities. This research laid the foundations for Sylvia’s enduring commitment to exploring the geographies of gender in the developing world as well as her belief in the importance of empirical research rooted in sustained fieldwork. Just as in her life in general, Sylvia had a gift for engaging with people, for interviewing them with great integrity and warmth. People opened-up to her because they trusted her and knew that she was genuinely interested in their lives and in making the world a better place.

Following a period as a post-doctoral researcher at University College London, Sylvia moved to the University of Liverpool where she shared a post between Geography and the Institute of Latin American Studies for over a year before moving to the Department of Geography and Environment at the London School of Economics in 1988 where she remained for the rest of her career with an important affiliation with the School’s Gender Institute from 1992 onwards (she also held visiting professorships at the Universidad Complutense de Madrid and the Universidad Pablo de Olavide de Sevilla in Spain, as well as the universities of Fribourg, Bern and  Gothenburg). It was at the LSE that Sylvia carved out her position as a global authority on gender, poverty and development. Among her many accolades, in 2013 she was featured as a Global Thinker on Gender and Poverty in Robin Cohen and Paul Kennedy’s [eds] Global Sociology and in 2015 she was appointed as a Fellow of the Academy of Social Sciences, which described her as a “world-leading figure in international social science, helping to stake out the field of gender and development”. She was also the President of the Society for Latin American Studies, UK, from 1997-9.

Sylvia was a wonderful teacher who inspired many generations of undergraduates, postgraduates and PhD students. A natural communicator with a wonderful sense of humour and fun, Sylvia’s lectures and seminars were fabled far beyond the LSE. She was especially proud of her PhD students whom she assiduously and kindly mentored along with numerous early career scholars as a core aspect of her feminist ethical philosophy on her working life. Indeed, her support of younger generations of scholars was legendary and has ensured the continued health of so much feminist research in the global South and international development policy where many of her students have ended-up.

Sylvia herself made extremely important contributions to the development policy world reflecting her commitment to engendering positive change in the global South. Her engagement with policy-makers included working as an advisor or consultant for, among others, UNFPA, UN-DESA, Commonwealth Secretariat, UN-Habitat, the ILO, UNICEF, ECLAC, the UNDP, and the World Bank. She was also an expert advisory group member on the UN Women State of the World’s Women 2018: Families in a Changing World: Public Action for Women’s Rightsand co- lead author of theUN-Habitat’s first ever report on the State of Women in Cities 2012/13. As well as shaping international gender policy through her engagement with these organisations, Sylvia also worked on the ground to institute change. Most notable was her work striving to eliminate Female Genital Mutilation and Cutting (FGMC) in the Gambia alongside the Gambian human rights organisation, GAMCOTRAP, whose campaigning led to the final outlawing of FGMC in November 2015. Her work within and beyond the Gambia was pivotal in this landmark ruling.

As one of the world’s most respected feminist development geographers, Sylvia’s work has transformed thinking and policy-making on gender and poverty and her inspirational teaching has created an amazing legacy of talented people across the globe who think about the world through a gendered lens.

Sylvia’s stellar career was matched by a wonderfully rich personal life full of legions of friends, a very close and loving family and numerous passions and interests. She was a keen photographer and photographic documenter, a gym fanatic and bicyclist, a cinema goer and avid reader, and she had a passion for stylish clothes and jewellery. She also loved animals, music, to dance and to travel, but maybe most of all she enjoyed catching up with her family and friends, sharing a drink, a joke and an experience, revelling in the simple pleasure of the human company of those most dear to her.

Sylvia is survived by her husband Chris, her mother June, her two sisters Adrienne and Yvonne, four of her five nieces and nephews, and her five godchildren.

Learn more about Sylvia in her own words here. 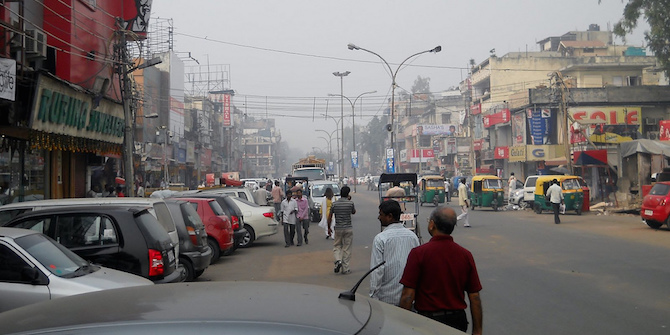 The continuing legacy of partition in India’s urban spaces