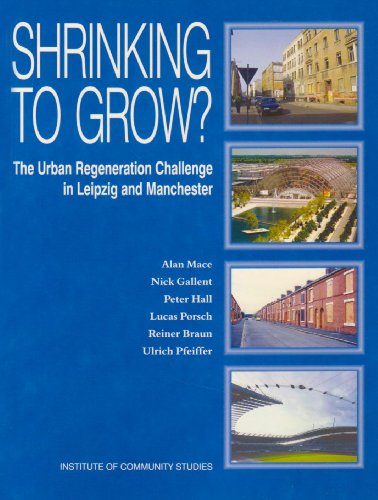 Both Leipzig and Manchester have experienced a severe loss of population: Manchester over a long period since the middle of the twentieth century; Leipzig sharply, after reunification. While both cities have greatly improved their city centres and can claim many regeneration successes, both have, at best, stemmed their population losses. Linked to this demographic shrinkage has been the presence of a large stock of low-demand housing. Given this, and the potential for future population loss – especially in Leipzig, with falling birth rates nationally – in this study we asked whether these two cities could plan for an economically sound contraction in their populations. We set outscenarios for future household numbers in both cities and consider the implications of a future loss of households.

However, it was soon evident that neither city could countenance such an approach; in fact, both were actively planning for household growth. Given this approach we then considered how these two cities could best meet their aims. Both cities have a large number of young people, not least because of their universities. This is an asset in an ageing Europe, but only if these young cohorts can be retained: the range of job opportunities that the cities can offer is therefore crucial. Still, this is not enough.

We demonstrate that stemming massive population losses – though partially successful at present – may prove a fragile solution, not least because nearby suburban areas are often able to offer housing choices and levels of liveability that are not necessarily available within the city boundaries. In many instances it is possible that even where the cities offer exciting career opportunities, they may not benefit from an increase in residents. The key here is the retention of households as they establish families. Therefore, we suggest two goals for the future:

The second, we believe, will be harder to achieve than the first. It will mean multiple action in a number of fields: planning and urban regeneration, education, social policy and transport policy.

We also suggest key policy levers that will have to be addressed, especially greater discretionary spending powers to meet local needs, which should be implemented locally. Both cities have demonstrated an ability to act proactively. This poses a key final question: can their national and regional governments now give them the necessary freedom, allowing them to take risks to develop such an entrepreneurial approach?